FlyDonna is a two-day event for female pilots and air sports enthusiasts, combining air shows and entertainment with networking and Round Table discussion to promote female participation in aviation.

Professionals and amateurs of all disciplines, ages and backgrounds took part in the 8th edition of the event on 15-16 September, which took place at the Aeroporto Adele Orsi, close to Lago di Varese in the Italian Lakes – a perfect setting to honour women in air sports as Adele Orsi was a famous female pioneer pilot.

For the organiser of the event and President of the Aeroclub, Margot Acquaderni Caraffini wished to bring together a “meeting of all women fascinated by flying of any form, hoping to involve even more in the future.”As part of the FAI’s ‘Women with Wings’ series to encourage female participation and interest in air sports, the Round Table discussion at this year’s FlyDonna was ‘Women with Wings: Living your Passion’.

Focusing on the contribution of women in flying and the passion that drives them, were speakers Margot Acquaderni Caraffini, glider pilot and President of the Aeroclub; Liz Sparrow, of the British Gliding Team and founder of Women Glide UK; Nadiah Wafa, Malaysian Paraglider and Donatella Ricci, ultralight and hot air balloon pilot and founder of Flydonna.

Donatella Ricci explained how she recently broke a world record in gyroplane: “If you want to achieve something it’s a question of passion, not of being a man or a woman.”

She said that similarly, “Events such as this can put together women who share the same passion – together we can have a target and reach it.”

It was acknowledged that there was still a long way to go in the promotion of air sports to female participants, but that gradual progress is happening. 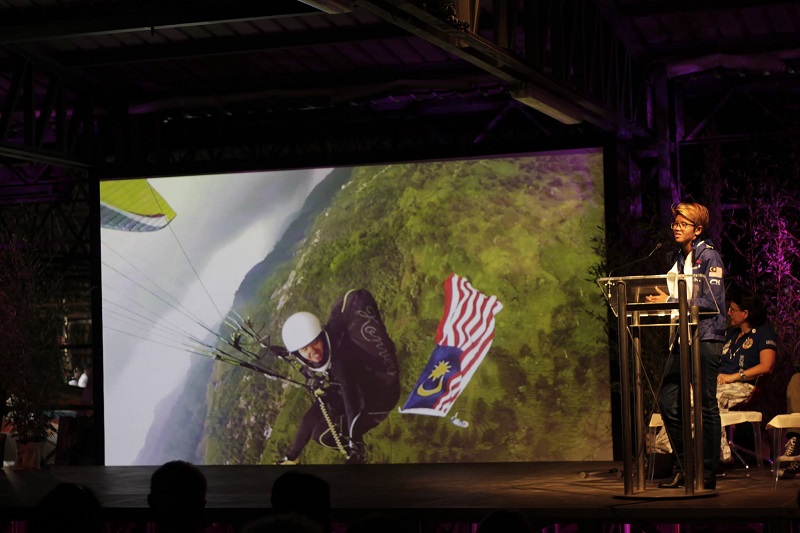 Pierluigi Matera, Special Commissioner to the Aeroclub of Italy listened to the presentations and commented that he learnt a lot, adding that he was very receptive to female pilots who wished to put forward initiatives, because “women’s ideas for women are better than men’s ideas for women”.

FAI Executive Director, Alvaro de Orleans Borbon was also present at the event. As someone with the representation of women in flying in his aims, he suggested a permanent working group to promote women in the sport, to identify more clearly the reasons that not more women are interested in flying, and to reveal the obstacles faced by those already involved in air sports.

Highlights of the event included a display by the WeFly Team, the only air patrol in the world where two of the three drivers are disabled, a fox glider, parachutists flying the FlyDonna and Italian flags, police and fire brigade helicopters, as well as a pink Porsche (one of sponsors of the event), signed by the female pilots.