"You're part of the aircraft, you feel it in your skin." Italian Luca Bertossio, 25, is talking about why he swapped motorised aerobatics for gliders after his win in the aerobatic gliding competition.

"With a motor you always have an excuse, but you don't need it. Two wings are all you need to fly in four dimensions. You have to get it right first time. Even your landing. You can't go around for a second try," he explained.

Bertossio, a RedBull-sponsored pilot and the 2015 World Champion, has just beaten Hungarian pilot Ferenc Toth in to second place in the aerobatic gliding competition at the World Air Games in Dubai. Premsyl Vavra, of the Czech Republic, claimed bronze.

Pilots had to impress the judges in three heats. The first round was a free programme, which Bertossio described as a tactical round. Next up was the "unknown programme", where the judges define which figures have to be flown testing piloting skill. Finally, there was the freestyle round. 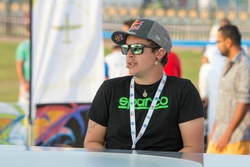 "I like all three, but freestyle is my signature," said Bertossio. "It's a chance to show off your fantasy and imagination.

"It's all about the concentrating through the effort, G-forces, and speeds. Each heat is only two or three minutes, but your concentration has to be 100% in that two minutes. You prepare for years for those two minutes."

Pilots shipped their gliders to Dubai in preparation for the contest. The young Bertossio said of the field: "It's an honour to compete with these pilots. They were my idols growing up. It's a dream that I might beat them. But really my toughest adversary is myself. I always want to have done better.

"Aerobatics is more than a sport, it's a philosophy for life. It's the pursuit of perfection, and that's a journey that never ends, but I enjoy the blood, sweat, tears and smiles along the way."