A city of many hills, Lausanne is situated on the northerly shores of scenic Lake Geneva, the biggest lake in Western Europe, it is the capital of the canton of Vaud and Switzerland's fourth largest city. Lausanne has a long and eventful history, which began when the Romans chose to settle and camped next to the lake, at Vidy. Today, the city is a lively and attractive tourist destination, and home to a number of important institutions, such as the International Olympic Committee and the Federal Tribunal.

With its location, in the west of Switzerland and at the heart of Europe, Lausanne offers its inhabitants a temperate climate which is rather cold in winter and rather warm in summer.

How to arrive - depart

Geneva Cointrin International Airport (GVA) is the closest major airport to Lausanne. It is conveniently located at a distance of 60 kilometers. Direct trains run every 20 minutes, reaching Lausanne in 48 to 62 minutes.

Zurich Kloten International Airport (ZRH) is located approximately 230 kilometers from Lausanne and has direct trains that reach Lausanne in about 2hours 30 minutes.

Lausanne is located on the main network of the Swiss Railways. Convenient connections to Germany and Italy, as well as, direct fast train to France are available.

Lausanne is connected to the Swiss highway network at the junction of the A1 and A9 autoroutes and can be accessed from all surrounding countries.

Lausanne public transportation (TL) operates a network of buses, trains, and trams in and around Lausanne. As a Lausanne hotel guest, you are entitled to free public transport throughout your stay in Lausanne. The hotel will provide you with a travel pass when you check in.

Taxis are considered to be quite a luxurious and expensive mode of transport in Switzerland, which makes public transport generally the favoured option of people. However, from midnight, public transport stops its activity for the night. 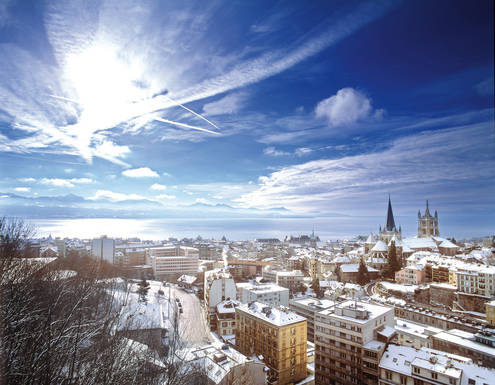 So much road has been travelled, so much water carried by the Rhône into Lake Geneva and so many centuries spent shaping the Lousonna of Gallo-Roman times to make the Lausanne of today! One enduring factor throughout is the role of international crossroads that has been forever assumed by this city, a staging post on the major routes linking Italy with Gaul via the Great St Bernard Pass and an obligatory crossing point between the Mediterranean and the Rhine. Following the barbarian invasions the town moved upwards and was built on its three hills, where it developed its economy, its artisanry, its culture, its tourism, etc. Down the centuries, the city has been enriched by architectural works, inheriting from its episcopal past the Ancien Evêché (15th century) and the Château Saint-Maire (15th century), while the Cathedral (built between the 12th and 13th centuries) became known as one of Europe's finest monuments of Gothic art. In its shadow, the Cité remains as a testament to a bustling medieval way of life, the foundation of modern-day Lausanne.

In 1915, Baron Pierre de Coubertin, who revived the modern Olympic Games, chose Lausanne as the headquarters of the International Olympic Committee (IOC), and, in 1994, Marquis Juan Antonio Samaranch conferred letters of nobility on it by awarding the city the title of Olympic Capital. The Olympic Capital is home to virtually all of the Olympic institutions as well as 44 international sports organisations and federations, cherished here as nowhere else, as demonstrated by the Maison du Sport International based between the headquarters of the IOC and The Olympic Museum on the shores of Lake Geneva. Under the presidency of Jacques Rogge since 2001, the IOC, together with all its affiliated bodies, plays a vital role in the life of Lausanne and is a standard bearer for the name of Lausanne, whose qualities as a host city make it a permanent ambassador for sporting diplomacy. The only one of its kind in the world, the Olympic Museum welcomes 200,000 visitors every year. Closed until 2014 for renovation, it moved part of its Olympic treasure on board a Belle Epoque ship moored opposite the museum to ensure that its heritage remains accessible to the public.

The picturesque Old Town with its narrow alleys and boutiques, the Olympic centre with its fascinating museum, the lake-side quarter of Ouchy with its lively cafes and the many celebrated gourmet restaurant in and around Lausanne all make this beautiful, vineyard-draped city the pride of the Lake Geneva Region. 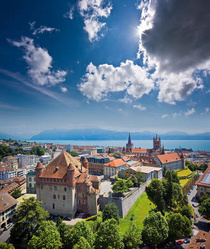 Lausanne medieval centre, which is dominated by one of Switzerland's most impressive Gothic-style cathedral, the Cathédrale de Notre Dame, is known as "La Cité" (Old Town). In this area reside many of the main landmarks, such as the Château St. Marie, an imposing 15th-century castle where the Swiss government of the Canton of Vaud is nowadays based and the Old Academy. Close by is the beautiful Town Hall (Hôtel de Ville) and Palud Place.

The most prestigious street in Lausanne (Rue de Bourg) used to be lined by small inns, dwellings of local craftsmen as well as richly decorated homes of nobles, nowadays "up-market" shops, leads to Place St Francois. Dominated by a beautiful church, the most famous square in Lausanne was protected to the south by the city wall but there is hardly a trace of this vestige which was mainly destroyed during the 19th century. After the construction in 1840 of the "Grand-Pont" the square became the main stagecoach post. This bustling activity brought in its wake the construction of the "Grand Hotels" of that time. They were demolished at the beginning of the 20th century to make way for banks, turning Saint-François into the financial center of Lausanne.

This ancient valley, which used to be dotted by vineyards, mills and houses, was filled in during the 19th century, in particular by the soil extracted when the first Swiss funicular was drilled in 1877 connecting Ouchy with the Flon. Then warehouses were built to harbour the goods which came by boat from Ouchy. Renovated recently it is now home of chic shopping, trendy restaurants, bars, clubs and cinemas.

Lake shore from Ouchy to Vidy

On a sunny day, head to the lakeside, endless of recreational attractions are based there. In addition, you can find a leisure area with numerous sports fields, sandy beaches and some waterfront restaurants as well as Bellerive Plage large outdoor swimming pool.

To find out more about the city, you should pay a visit to the Musée Historique de Lausanne (History Museum). For a touch of science, Lausanne has two popular museums, the Espace des Inventions and La Maison d'Ailleurs. For Art, then look into the Museum of Fine Art (Musée Cantonal des Beaux Arts) or the MUDAC (Museum of Applied Contemporary Art and Design). Musée de l'Elysée is entirely devoted to photography. In addition to an exceptional collection, it presents themed exhibitions and historical retrospectives.

Lausanne's streets offer everything that today's quality conscious shoppers could desire. Retail outlets of every kind await you in the town centre; food, fashion, clocks and watches, opticians, entertainment electronics, pharmacies, galleries, bookshops. Everything you need lies within this area. Markets take place on Wednesday and Saturday mornings.

Close to Lausanne, the Lavaux vineyards, a UNESCO World Heritage Site, consists of terraces on steep slopes all the way down to Lake Geneva, covering an area of 830 hectares between Lausanne and Montreux. Next to the lake, lies the town of Vevey, where Charlie Chaplin lived for around 25 years at the end of his life. And Montreux, famed for its summer jazz festival and glorious views.

Within easy reach are a number of excellent Alpine ski resorts.

While Switzerland is not part of the European Union and thus is not obliged to convert to the euro, a large number of businesses accept euros and many prices are nonetheless indicated in euros so that visitors may compare prices. However, change given back to the client will most likely be in Swiss francs.

There is an exchange office at the main station in Lausanne which is open:

The safest and easiest form of money are traveler's checks and/or credit cards. The cards most used are Visa, MasterCard and American Express. Many ATM machines are equipped with the CYRRUS or MAESTRO system. It is recommended to have a small amount of cash on hand upon arrival in Switzerland for immediate expenses, i.e. taxis, city transportation, etc.

Smoking has been banned in all public premises in the interests of protection from passive smoking.
Smoking is, however, permitted in restaurant smoking area, terraces and outdoor.

Situated very close to the city centre and the old town, the Parc de Mont-Repos is a green and peaceful oasis. Located on its northern part, you will find a neo-gothic tower with its waterfall. A good way to escape from the busy city and think you are in the middle of the forest.

For the past 600 years, the traditional nightwatch calls out each hour from 10 p.m. to 2 a.m. every day of the year, from the top of the cathedral, Once you have climbed the 224 steps of the tower where the seven bells of the cathedral are found, you will be able to take in a superb panorama of the city and benefit from the knowledge of the nightwatch on the history of the cathedral and the old town. In order to do this, you will have to take an appointment with him. He will come to collect you at one of the side doors of the cathedral and will bring you up to the top. Although worth to go during daytime, for a splendid view over the lake, the French Alps and the city of Lausanne

Located in rue de la Mercerie this neat little creperie is a gem. Friendly service, affordable prices and even a nice quiet terrace for the summer months. 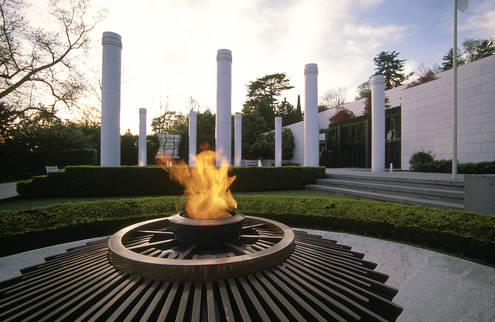